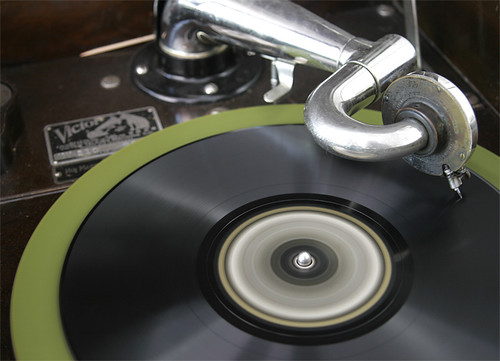 The history of vinyl records is a long and interesting one, this is a brief run down.

The earliest idea to record sound was possibly in 1806 when Englishman Thomas Young recorded the vibrations of a tuning fork onto a rotating drum covered with wax.
It wasn’t until 1877 that a realistic approach to both record and playback took place. Thomas Edison experimented with an answering machine for business men, as part of this he ran paraffin coated paper under a stylus while shouting into a telephone speaker, the vibrations left a faint impression of his voice which he could later play back. The paper was then replaced with a rotating drum coated in tin foil which ran underneath the stylus, a clearer speech like noise emanated which gave Edison the idea to be able to record and also play back a sound source – “Mary had a little lamb.” Later that year he built the first Phonograph choosing the rotating drum over flat discs as a format.

The idea of using a flat disc to record audio probably first came about in 1877 when Frenchman Charles Cros described a recording and playback device although this was never built. The first successful recordable discs came later in 1881 when Charles Tainter made the first lateral-cut records in the Volta laboratories of Alexander Graham Bell in America but there was still no method of playback.
In 1888 Emile Berliner perfected playable 7? Lateral-cut disc record as the format for his “Gramophone“, these discs were initially only used in toys, but were later to become the dominant music format for many decades and still exist today in a similar form.

Various materials have been used for making disc records, from shellac (taken from a species of beetle) to rubber but the most successful format came from Alexander Parkes invention of plastic. Shelac was the more popular format until plastic vinyl took over in the early 1930’s, vinyl success arrived through it’s flexibility, better sound quality and strength.
Three main record sizes have remained popular throughout the history of recorded discs, 12″, 10″ and 7″ each with their own niche markets.
Other formats have challenged vinyl over the past century, from rotating cylinders, plug-in cartridges, cassette tapes, compact discs and more recently digital media such as the i-pod and mp3 downloads. Vinyl remains popular due to it’s great collectibility and superior sound quality to all of these formats as well as being the DJs choice for dance music.

DJing came about during the second world war as a form of cheap entertainment for U.S. military troops, people started using two record decks to create a continuous flow of music for dances and night spots, from this the disco was born.
Beatmatching came about in the late 1960’s when Francis Grasso counted the tempo of two records with a metronome and looked for records with a similar tempo. Later a mixer was built for him by Alex Rosner which allowed him to listen to any channel in the headphones independently of what was playing on the speakers; this became the defining feature of DJ mixers.
DJs took vinyl to new levels in the 1970’s when hip hop DJs started to experiment with two records at a time, from scratching the record (with the needle) to repeating drum breakdowns with two copies of the same record.

This article is courtesy of Nick Byng of Dance music specialist site HeyDJ.com a longer version of this article can be found here